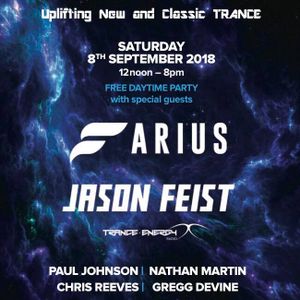 Biography .: Jason is one of South London’s most exciting Trance and EDM dj’s, he always gives 100% and never fails to produce amazing performances and deliver what is asked of him. Jason started out in 1996, like most listening to other dj’s like his all time hero DJ Judge Jules on Radio 1 and thinking “i can do this”, so he bought a basic 2 turntable and 2 channel mixer, set it up with his HiFi system in his bedroom and practiced practiced practiced. Jason started getting confident and made a few mix tapes for friends which led to his first ever live play in his hometown of Croydon @ 1921, where he held his first residency, thanks to Mr Jon Foreman. After only a couple of sets he was asked to play alongside Alex P at an Ibiza reunion night in 1921 and basically has not looked back since. He has held residency’s across the uk from Swansea to Croydon to Soho (London) from there he was asked to play alongside Rui De Silva at the famous Turnmills for The Gallery…. Jason has also had many radio shows which have aired across the world and at the moment has a monthly residency on trance-energy Radio.

Over the past 16 years Jason has gone from strength to strength, playing at nearly every main club in London and gracing some great festival stages also playing all over the world including Ibiza, Ayia Napa, and most famously Thailand at the Full Moon Party, Koh Phangan with legendary Graham Gold. Jason has shared the decks, warming up and following the likes of, Graham Gold, Matt Darey, Charlie Hedges, Alex P, Simon Dale, Steve Smart and many more…

Check these shows out.

7am to 9 am Every weekday

It’s that time again! Beat Inception is back!